EDITOR’S NOTE: Cody Prewitt is a former All American safety for Ole Miss. His intensity, ferocity and talent are well-remembered and always missed. We are blessed to have Cody sharing his time and insights.

OXFORD, Miss. — Before diving into the game, itself, I would like to first mention one statistic that has to be part of any discussion around Saturday’s Ole Miss victory over a hot Texas A&M team that upset ‘Bama just a few weeks ago. (While I do recognize something that happened weeks ago has very little bearing over what happens today, I bring up said game to emphasize that the Aggies are a seriously capable football team with top-tier talent and arguably one of the best active college football head coaches in the country.)

For anyone who may not be aware, this very important statistic we should all recognize is that Ole Miss currently sits 6-0 this season playing in the Vaught!

The reason this particular statistic is so important to highlight in reference to Saturday’s win is because the Rebel Nation family that packed the Vaught Saturday should, without a doubt, be given the title of MVP of the game.

I was fortunate enough to be on the sideline, even got to yell a little bit to everyone from the mic (which that experience could be its very own article). I’m not sure I can remember a game in recent years where this past weekend’s atmosphere in the Vaught can come close to being comparable.

I felt the passion that filled the stadium, so I know for a fact the opposing team felt it as well. Granted, A&M might describe it a little closer to “hostility” as opposed to passion, but regardless of the interpretation by either side, Rebel Nation created a palpable, almost tangible degree of energy that should be the desired standard for any college football fan base in the country.

I may not be dressing out anymore, but I’ll always be a Rebel so thank you, Rebel Nation family, for showing up and showing out on College GameDay, the biggest stage of CFB Saturdays!

Now we can talk about the reason Rebel Nation was out in full force Saturday, our Ole Miss Rebels!!

The offense did start off a little more slowly than what we have grown used to watching every week, but like I noted earlier, this is a TAMU defense that was able to keep an incredibly explosive ‘Bama offense at bay long enough to get a win against Saban just weeks ago, so they deserve, and have earned, the credit for their consistency on defense.

Having given the Aggie defense credit, I do still believe that if our offense was healthy we likely would have had quite a few more points on the board at the end of the game. Unfortunately, we did leave some points on the field with a couple trips to the red zone that didn’t end with 7 points. But, again, I think it’s worth noting the unit’s injury issues that have plagued the offense this season and that reality manifests itself every week in some capacity.

Saturday against A&M, our injuries manifested themselves in a couple of fruitless trips in the red zone. However, the positive side to this is one of the potential causes to any loss of productivity on offense Saturday could be attributed to us having a few guys back on the field who had not been prior to Saturday — and that can cause issues communicating on the field and/or rhythm of the offense in general.

Luckily we do have one of the best (THE best, in my opinion) QB’s in the country and Matty has shown repeatedly his ability to manage his offense. Regardless of the physical health of the offense, his leadership keeps the mental and emotional state of the unit pointed in the right direction.

At the end of the day, the offense put enough points on the board to get the win, and they even got a little extra help padding the scoreboard with a pick-six from a defense who showed that they are determined to make their identity clear … The Landshark D.

Like I’ve been saying for a few weeks, if not all season, this group of guys on defense has been progressing every week to become not only a defense capable of controlling and winning games, but one who is regaining the respect and pedigree that comes with the title of being the Landshark Defense of Ole Miss.

In the last few weeks, it has been difficult to try to single out any one particular player on defense because I’ve simply been impressed and proud of the entire defense collectively, and it’s just as difficult this week, possibly more so.

We shut down a very talented SEC offense for a full 30-minute half again. The Rebels have now done that four times this season: Louisville (first half), Tulane (second half), Liberty (first half) and Texas A&M (first half).

The concept of the defense “being there” is starting to become much easier to grasp mentally. Over these last couple of weeks, the cohesiveness among the guys on defense has been beautifully obvious; guys are doing their jobs and holding each other accountable, and it has directly translated to consistent execution on defense.

Everyone knows how dominant our offense can be when healthy, but as of Saturday, I think everyone can now say that we have a defense that can be just as dominant when we have 11 guys on the field who believe in each other, trust each other, and are all clear on what it is they need to accomplish when they step out on that field.

Ashanti Cistrunk picks off Zach Calzada off of the tipped pass by the A&M receiver. Snoop Conner would score 2 plays later for Ole Miss.

My biggest takeaways from Saturday are that the offense is getting healthier and the defense has seen what it is are capable of.

As we get guys back healthy, I hope to see Matty get the opportunity to solidify his status in the Hei2man discussion (not a discussion, he is the best!) but he will need his weapons back healthy and playing to separate himself from the pack.

The Landshark D just needs to appreciate the performance they had and continue to build on that success, especially if injuries continue to hinder the offense for the remainder of the season, as the defense will have to maintain this week’s high level of execution to continue giving us opportunities to win games.Hotty Toddy!! 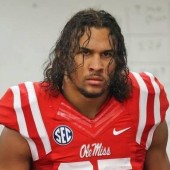 Coming out of Sylva Bay Academy, a small private school in Bay Springs, Mississippi, Cody Prewitt was one of 10 players from the 2011 Ole Miss Football signing class who received high school All-America honors. In 2012, Prewitt started every game and finished second on the team with 80 tackles. He helped lead Ole Miss to a 7-6 record and a bowl win over Pittsburgh. In 2013, Cody played in every game with 11 starts and led the SEC and tied for seventh nationally with six interceptions and finished second on the team with 71 tackles, 13 passes defended, four tackles-for-loss, and two forced fumbles. For his play, he became the 55th first team All-America selection in school history and helped lead Ole Miss to an 8-5 record and a bowl win over Georgia Tech. Cody was named a first-team All-American by both the Associated Press and USA Today. He was named named to the All-SEC first team by the AP, ESPN.com, Sporting News, College Sports Madness, and by the SEC coaches. In 2014, Cody continued his decorated career at Ole Miss. He became the first player to return to Ole Miss as a first team All-American since Patrick Willis did so in 2006. He played in 13 games in 2014, finishing with 64 tackles on the season, 44 of which were solo. He notched 3 INTs, and had a fumble return for a touchdown against A&M. In 2014, Cody was named All-America second team (AP, SI.com, CBS Sports, Scout.com, Athlon) • All-SEC first team (consensus) • Jim Thorpe Award Semifinalist (2013 and 2014) • Midseason All-America and All-SEC • Preseason All-America and All-SEC • Week 7 National Defensive Player of the Week (after a 75-yard interception return for a touchdown at Texas A&M) • Helped Ole Miss rank top 15 nationally in total defense (321.2 ypg), opponent 3rd down conversion (31.1) and red zone defense (71.9)