Monday night was the first game of the season for the Ole Miss Rebels. It was the first time many players would get to suit up for the Red and Blue. There were other important firsts in Orlando as the Rebels took on Florida State. The amazing touchdown catch by freshman wide receiver Dekaylin Metcalf will be cherished by the Rebel family for a very long time. Not only was it a great catch, but it was also his first catch in an Ole Miss uniform. Defensive lineman Benito Jones played in his first collegiate game, but the game also represented another first for Jones. It would be the first time he put the pads on without his father around to watch him play.

Benito played his high school ball in Waynesboro, Mississippi at Wayne County. Rebel fans are familiar with the War Eagles, in large part to beloved Ole Miss alum Jerrell Powe. Powe was one of the best high school defensive tackles to ever come out of South Mississippi. As expected, Benito drew plenty of comparisons to Powe.

Jones would go on to have an outstanding high school career. As a senior, he was selected to the Elite 10 by SES Mississippi as well as the Clarion Ledger’s Dandy Dozen. He also helped lead his team to the 5A State Title.

On February 3, Jones signed his National Letter of Intent with Ole Miss making him another big-time defensive tackle from Wayne County that would head to Oxford.

Expectations have been high for Jones leading up to the season kickoff in Florida against Florida State. It was quite a stage to begin a college career. All summer long players and fans have been counting the minutes until toe would meet leather and the season would officially begin.

Fall classes began on August 22, at Ole Miss. On August 24, a Wednesday, Benito was pulled out of one of his morning classes to learn that his father had passed away.

The news of Benito’s loss broke when Hugh Freeze tweeted:

Man, life is tough. RebelNation, please pray for @jones_benito and family. He lost his father today. He loved his dad!! Life is short, love

Less than two weeks after losing his father, Jones and the Rebels would head to Orlando to take on the Seminoles.

A Landshark is born

Benito played solid football throughout the game against Florida State. His biggest moment came in the second half. Coaches always raved about how quick his first step off of the ball was and that is one of the main reasons he was such a highly recruited player. His agility was certainly on full display Monday night.

Florida State quarterback Deondre Francois took the snap and handed off to the running back. As soon as the back clamped down on the football he was greeted by 6-2, 308-pound Benito Jones.

Jones stuffed him in his tracks for a big loss of yardage. The true freshman then jumped to his feet and with his teammates rushing to briefly celebrate with him, put his hand to his forehead. And with that another Landshark was born.

This moment was exciting and from a spectator’s standpoint, also fleeting, but in the big scheme of things it was so much more. A young man who, this time last year had just helped his team knock off the Meridian Wildcats, made his presence known on one of the game’s biggest stages. He introduced himself emphatically to the college football world while battling the adversity that comes with losing a loved one. It must have been a bittersweet moment for Jones and his family, one of many more to come.

Yes, the Rebels lost the game but sometimes it’s little moments that take place within the battle, like a kid from Waynesboro playing his broken heart out for his Rebels, that are worth so much more than a win. 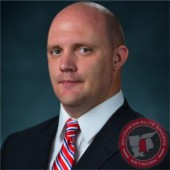 Webb Lewis is the founder of the Southern Elite Sports Media Network and the Fortius Project Combines. He played football for David Cutcliffe at Ole Miss and was a member of the 2004 Cotton Bowl team. He loves covering high school football in the great state of Mississippi but has a passion for the Ole Miss Rebels and loves to talk about the history of the Red & Blue. He and his wife, Tiffany have a son, Jack and reside in Oxford.

Week 13 in the SEC: Recap of Action Around the League