OMAHA, Neb. — Ole Miss fans love their baseball and they demonstrate that regularly at Swayze Field. Though they’ve been spoiled by success the past couple of decades, trips to Omaha have proven mostly elusive. In the not-so-distant past, a trip this season was unthinkable. But it happened. And as soon as the Rebels punched their ticket to the College World Series in the Hattiesburg super regional, many of those fans began making plans to visit the Gateway to the West. Or Swayze West as it will almost certainly appear this weekend.

Hundreds of them have been here. Thousands more will arrive by game time Saturday night—some of them returning after being here last weekend and having to leave.

They came to see Dylan DeLucia and Hunter Elliott deal on the mound.

They came to see Kevin Graham deliver in the clutch.

They came to see Justin Bench get hit by a pitch. (How has that not happened yet?)

But mostly they came to see the Rebels win a national championship.

Bill Crim and his son Balie, who is soon to begin medical school, drove from Jackson and have been in Omaha for all the Ole Miss games so far. They even helped support the Rebel Jell-O shot cause at Rocco’s.

G (Yes, it’s just “G” he says) Morgan, lives in Dallas, Texas but was in Santa Monica, California watching the Rebels defeat Southern Miss. He flew back to Dallas on Wednesday of the following week and drove to Wichita, Kansas that Thursday where a Texas-grad friend of his flew in to meet him. They drove to Omaha on Friday. Because he had a wedding to attend the following Friday night, G drove from Omaha to Topeka, Kansas on the following Tuesday, the day after Ole Miss beat Arkansas in the winners bracket. He drove the rest of the way to Dallas on Wednesday (only to discover the air conditioning in his house was out—and it was 107 degrees.) The next day he flew to Colorado Springs for the wedding, which was occurring Friday night. He has a flight Saturday morning that will get him back to Omaha in time for game one. When asked why he would go to all this trouble, he replied “I’ve been an Ole Miss fan for 53 years. I couldn’t make it to Omaha in 2014 so I wouldn’t miss this for the world. This team is on fire.”

Roger and Brenda Glenn drove from Lafayette, Louisiana. The College World Series has been on their bucket list for a long time and they couldn’t pass up an opportunity to attend in 2022. Brenda had to fly home early in the week and after the Rebels lost on Wednesday, Roger planned to drive back on Thursday. When it was announced that game would be an afternoon game he decided to hold off, and after Ole Miss won he told Brenda to fly back. She booked a flight with no hesitation.

Ole Miss graduates of recent years and good friends Joey Ripplinger of Cincinnati, J.J Delpy of Maryville, Tennessee, Brooks Burton of Milwaukee, Wisconsin and Austin Prange of New Orleans all arrived in Omaha after Ole Miss clinched a spot in the championship series.

Eric Graeber and his 11-year-old son James left Oxford at 4:00 A.M. Wednesday morning and made it in time for the game. They packed for one day, with the plan being to go back home no matter  the result. “We got here and it kind of sucked us in” Eric said. They went shopping and have a neighbor friend bringing them another bag of clothes. According to James, being in Omaha to see Ole Miss in the College World Series has been “the most fun thing ever.” If you’re a Rebel fan you needn’t be 11-years old to agree with his assessment.

William Griffin of Jackson was on the 1977 Ole Miss team that won the inaugural Southeastern Conference Baseball Tournament championship and fell just short of making the College World Series. He promised himself if he ever had an opportunity to see Ole Miss in Omaha that he wouldn’t pass it up. He came to see the Rebels play in 2014 and returned this weekend to attend the championship series.

For many years Ole Miss fans have been known to expect the worst. This Ole Miss baseball team has done more than perhaps any Rebel men’s athletic team in memory to change that perception. Fans who traveled from Jackson, Dallas, Lafayette, Cincinnati, Maryville, Milwaukee, New Orleans, Oxford and dozens of other cities in numerous states all did so because they believe. They believe they’re going to witness Ole Miss baseball win a national championship. The journeys back home will likely be the most enjoyable of their lives if that proves to be the case.

Clint is a native of Pensacola, Florida with a BA and MBA from Ole Miss. He’s a season ticket holder for football, baseball and basketball who has made countless road trips to watch the Rebels play over the years. He’s witnessed the highs (2016 Sugar Bowl), the lows (Bryce Drew), and everything in between. He has three grown children (Will, Wes, and Reagan) and currently resides in Oxford with his wonderful wife Janna. 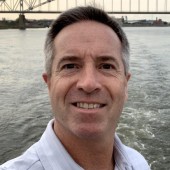 Clint is a native of Pensacola, Florida with a BA and MBA from Ole Miss. He's a season ticket holder for football, baseball and basketball who has made countless road trips to watch the Rebels play over the years. He's witnessed the highs (2016 Sugar Bowl), the lows (Bryce Drew), and everything in between. He has three grown children (Will, Wes, and Reagan) and currently resides in Oxford with his wonderful wife Janna.